Today’s consumers rely on search engines to help them find everything from restaurant recommendations to B2B software providers.

This means that regardless of what your business offers, your target audience is likely searching for products or services like yours on search engines like Google.

And if you want to attract them to your site, you need search engine optimisation.

But if you’ve spent much time researching your options with digital marketing, you’ve probably heard that before.

Once you’ve accepted this, though, the next logical question is how to do search engine optimisation.

An Introduction to SEO

Search engine optimisation, or SEO, is a strategy for improving your site’s rankings in search engine results.

It involves identifying which keywords and phrases your target audience uses when looking for products or services like yours, then working towards ranking well for those searches.

Today, SEO is an essential part of any effective marketing strategy.

But to fully illustrate its importance, let’s go over a few of the reasons you should be optimising your site.

1. It can help you build your brand

Although branding is often considered a more traditional marketing strategy, while SEO falls firmly into the digital category, the two involve similar steps.

Building a brand requires considering both what you provide, and what others say about it.

And when you look at the steps involved in optimising a site, the factors are similar. You need to create content that’s in line with your audience’s needs and interests, then find ways to earn links to that content from other sites.

If you keep this relationship in mind as you develop your SEO strategy, you can select keywords and create content that’s in line with the image you want your brand to have.

Then, your online presence will reflect your ideal branding — and help you establish it with your target audience.

On the surface, the goal of SEO optimisation is to improve your site’s rankings in search results.

But beyond that, the purpose of achieving high rankings is to attract more traffic — and ideally, to convert that traffic into customers and leads.

And in case you were wondering, it works.

Over the course of one year, a brand new site’s traffic can increase from zero to 100,000 visitors — entirely from SEO.

If you want to bring more users to your site, SEO is the best way to accomplish this goal.

3. SEO doesn’t require you to pay for ad space

One of the biggest advantages of SEO is that it doesn’t involve paying for ad space.

You determine a location you want your brand to appear, whether that’s on a particular TV channel or radio station, or in the pages of a magazine or newspaper.

Then, you pay the company that owns that media for placement. You might pay for your ad to run for a certain length of time, or within a certain number of issues. As soon as that period is up, your ad stops appearing — and stops generating results for your business. 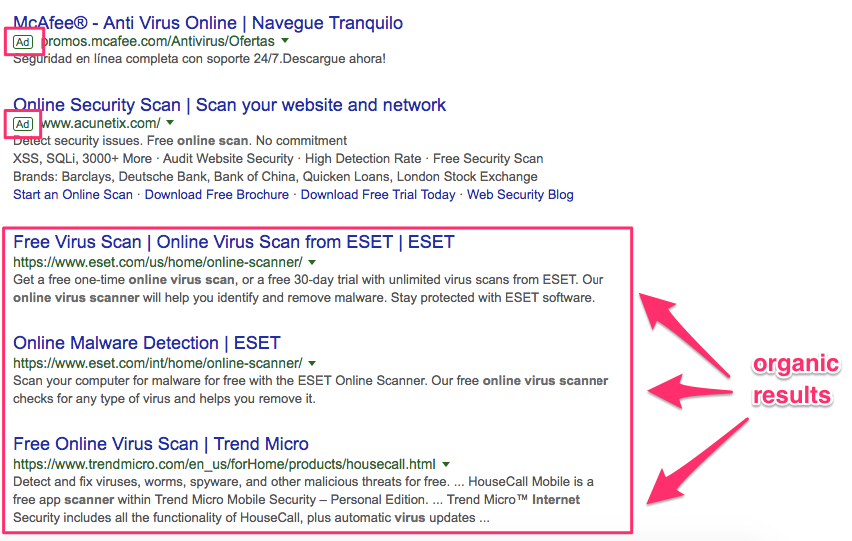 The top two listings in this screenshot are pay-per-click, or PPC, ads, as denoted by the small “Ad” tag.

Much like traditional ad campaigns, earning one of these spots involving ongoing costs.

Of course, if you’re familiar with PPC, you know that advertisers only pay when a user clicks an ad and visits their site. This certainly gives it an edge over traditional methods.

Still, every visitor involves a cost — and the minute an advertiser pauses their campaign, they stop showing up.

But the sites appearing in the organic results, directly below those ads, aren’t paying a cent for those rankings.

While they likely invested a significant amount of time and money into creating the pages that are ranking in those spots, they appear on page one because Google’s algorithm thinks they provide value to users.

As a result, they’re earning traffic without spending a cent.

4. It helps your target audience find your site

SEO can help your business get in front of your target audience as they’re actively searching for information.

And considering how common it is for consumers to use search engines to find information about products and services, this is a huge opportunity.

In fact, 62% of consumers turn to search engines first when they want to learn more about a new business, product, or service — and 41% use them when they’re ready to buy.

This means that if you want your business to be part of a user’s online research process, it needs to show up in search results for keywords related to the products or services you offer.

Plus, according to that same survey, 48% of consumers prefer to visit a business’s official website to learn more about them.

So having a strong online presence will not only help you reach your marketing goals but will also enable your target audience to research and buy in a way that works for them.

5. It boosts your credibility and authority

The Internet has drastically changed what the sales process looks like for many businesses.

That’s because today, consumers have access to a wealth of helpful resources that can help them learn about their options before they speak with a sales representative.

And with SEO optimisation, you can become part of that learning process.

That’s especially true if you combine your SEO efforts with content marketing. When you create informative, valuable content, you have the opportunity to build trust and credibility with potential customers early in the research phase.

First, a user finds your site by searching for information related to your industry and seeing one of your resources in the search results.

This is where the process slows down a bit.

That user might return to your site several times and read your email content regularly over the next few months without taking action.

And if you’re used to the traditional sales process, this can be frustrating.

But with each piece of content they read, you’re establishing your brand as a credible, authoritative source of information.

Then, when they’re finally ready to make a purchase or speak with a sales representative, they’ll know exactly which company to turn to — and be extremely comfortable doing so after all of the helpful information you’ve already provided for free.

6. It can help you stay ahead of your competitors

As you optimise your site, you’re not just working to improve where your site ranks on results pages.

You’re also moving above your competitors.

Just consider that the first result on any given results page gets an average of 20.5% of the clicks. From there, the second result gets 13.32%, and the third gets 13.14%.

This means that as you move up in search results, you’ll earn a larger percentage of the clicks for your target keywords — and your competitors will earn less.

Google’s ultimate goal is to provide the best possible results for their users.

As a result, many of their algorithm updates focus on making sure that they’re directing users to sites that not only provide relevant content, but also a great user experience.

That’s why today, technical factors like mobile-friendliness, usability, and site speed play a much bigger role in rankings than ever before.

While this means that optimising your site might require a bit more professional help, it also means that you’ll be continuously improving the user experience your site provides.

And when you consider the impact that user experience has on conversions, this can have a significant impact on your sales and revenue in the long run.

Finally, one of the biggest advantages of SEO is that you can measure virtually every aspect of your results.

Unlike traditional methods, which often rely on looking for correlations between ad campaigns and sales, it’s easy to see the return you’re getting from your SEO investment.

You can use tools like Google Analytics to monitor your traffic, referral sources, conversions, and any other metric that matters to your business.

This way, you can accurately evaluate what’s working — and what isn’t — and be confident that you’re allocating your marketing budget to the strategies that have the biggest impact on your most important goals.

We use cookies on our website to give you the most relevant experience by remembering your preferences and repeat visits. By clicking “Accept All”, you consent to the use of ALL the cookies. However, you may visit "Cookie Settings" to provide a controlled consent.
Cookie SettingsAccept All
Manage consent

This website uses cookies to improve your experience while you navigate through the website. Out of these, the cookies that are categorized as necessary are stored on your browser as they are essential for the working of basic functionalities of the website. We also use third-party cookies that help us analyze and understand how you use this website. These cookies will be stored in your browser only with your consent. You also have the option to opt-out of these cookies. But opting out of some of these cookies may affect your browsing experience.
Necessary Always Enabled
Necessary cookies are absolutely essential for the website to function properly. These cookies ensure basic functionalities and security features of the website, anonymously.
Functional
Functional cookies help to perform certain functionalities like sharing the content of the website on social media platforms, collect feedbacks, and other third-party features.
Performance
Performance cookies are used to understand and analyze the key performance indexes of the website which helps in delivering a better user experience for the visitors.
Analytics
Analytical cookies are used to understand how visitors interact with the website. These cookies help provide information on metrics the number of visitors, bounce rate, traffic source, etc.
Advertisement
Advertisement cookies are used to provide visitors with relevant ads and marketing campaigns. These cookies track visitors across websites and collect information to provide customized ads.
Others
Other uncategorized cookies are those that are being analyzed and have not been classified into a category as yet.
SAVE & ACCEPT